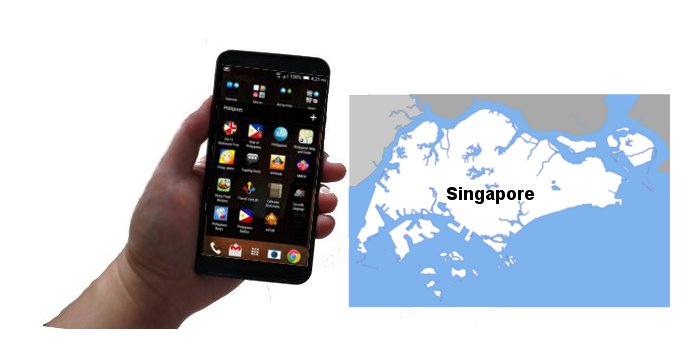 Singapore’s transformation from a rags to riches nation is pretty amazing. On this tiny Island with no natural resources other than human capital, Singapore has managed in four decades to become one of the most prosperous nations in the world. Both the government and its people try to be efficient- they walk and talk fast. Many things can be done online, including buying tickets and reloading credits on your SIM card.

Also, you’ve probably heard that Singapore has many rules and harsh penalties for breaking them. If you act with a modicum of courtesy, you’d never need to be concerned- just don’t get caught littering in public. In any case, it’ll be a breeze getting around this tiny Island nation. 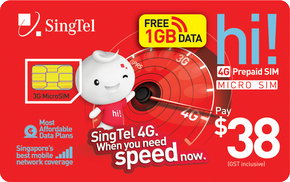 I went with a Singtel LTE SIM card, though I could just as easily have used a SIM card from M1 or Starhub. No matter, Singapore’s average internet download speeds ranks second fastest in the world and the entire city-state is smaller than the size of most metropolitan cities. Whether on a bus, inside a shopping mall, at Sentosa Park, or riding the underground Metro, you shouldn’t have trouble staying connected to the internet. Additional credits or Top-Ups can be purchased at most convenience stores or online (Singtel Online, M1 Online, Starhub Online).

More information about Singapore mobile operators can be found HERE.

I went armed with twelve mobile apps during my trip. I subscribed to the 7 day – 7 gb data plan for 7 SGD ($5.50 USD). The connection remained 4g for the majority of the time, dropping down to 3g a few times and rarely to ‘H’. When the signal was 4g, browsing was almost instantaneous. The one app that I found the most useful was Tripadvisor’s Offline City Guide. By the way, Singapore has alot of places to eat- I mean ALOT. That’s the reason I have listed at least 3 apps that help you decide on what place to eat. 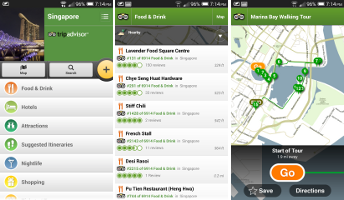 With nearly 7,000 places listed to eat and self-guided walking itineraries, Tripadvisor’s Offline City Guide is pretty handy. Just be certain to install and download the updates when you have a fast and free wifi connection before you use the app as it’s over 100 mb. See my in depth review of the app HERE. 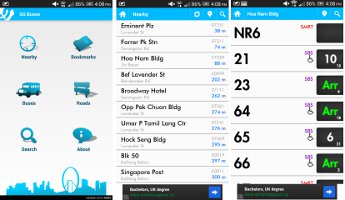 SG Buses provides route information with estimated arrival times for public buses in Singapore. It’s likely you’ll use the ‘Roads’ option to search for buses by the street name rather than by route number. The e.t.a. seems available for only certain bus routes, and the times reported don’t always coincide with the actual wait times. But this is nitpicking- the app is straightforward and easy to use.

– (removed due to excessive permissions – August 2014) 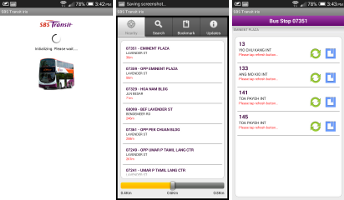 Why list an app that requires that you be connected to the internet just to even display simple static route information? It’s for the journey planner function. You can put in a starting and end point and it will provide you a bus route. 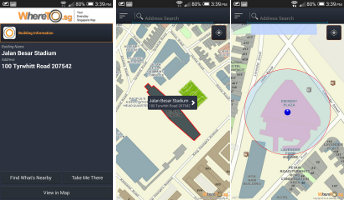 This app provides interest points on a map. It’s easy enough to use the map and browse through the myriad of categories. Clearly, you’d not care so much about Car tires- but cinemas and convenience shops, yes. The ‘menu’ button is in the top left corner of the map in case you mistakenly hit the back button (which will exit you completely out of the application). Another interesting function of the app is that it color codes areas according to their property value. You can get an overall idea of the high-rent district by using this feature. 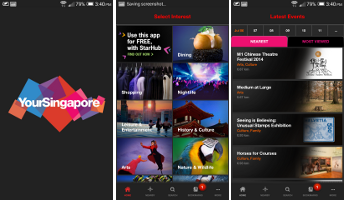 This app is sponsored by the Singapore Tourism Board. It’s got the requisite things to do and see section as you’d imagine such an app to have. The Traveller’s Essentials section is good to have around for emergency numbers, information centers, embassy number, and more.  The Latest Events section showcases current events listed by date and is probably reason enough to install this app. 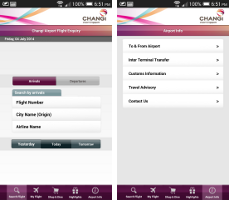 This is the official app from the Changi international Airport, voted one of the best in the world for travellers. Search for flight status, shops, restaurants, transport options, practically everything you’d need to know when in the airport and how to get out. The Aiport Info section is really complete and details 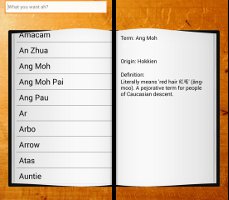 A handy phrase guide to some phrases you may hear in the streets or in the media in Singapore- it’s meant for Ang Mohs.

This app has a diagram of the Singapore’s Rail System. Clicking on a particular station on the map will give you a bit more information about that line. You can use it as a route planner as well. Click on a starting point, next the Purple Arrow, and then the final destination- the app will give you the approximate duration and price for the route. 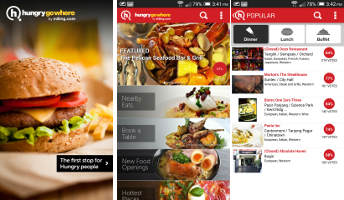 This is Singapore’s own app to help you find a place to eat. The app is a bit slow and does require an internet connection. The reviewers are all locals and thus you’ll have a different set of what are the Hottest Places than if you use an app with a more westernized audience. 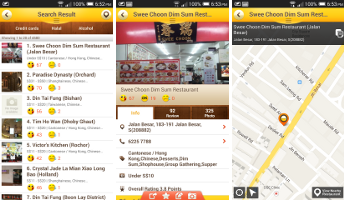 This app is an alternative to the hungrygowhere app. It’s brought to you by a Hong Kong based group that focuses on restaurants in  Asia. The interface is a bit more polished, as it allows you to find restaurants easier on a navigable map than the other app.

(removed due to excessive permissions – August 2014)

Google Translate
Singapore recognizes four official languages: English, Malay, Mandarin, and Tamil. The only one that Google translate won’t help you with is Singlish (but then, we have an app for that…)

Apps with Excessive Permissions not tested:

Paying for that Taxi Ride from the Airport