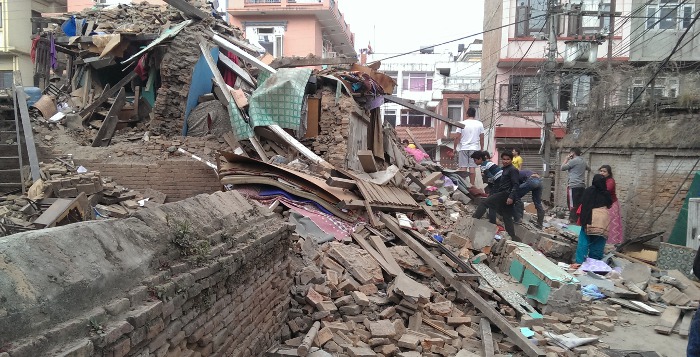 Yours truly happened to be in Nepal during the recent Earthquake. I was to be there for 18 days in total but not to participate in any extended hikes. What I knew going in was pretty much what information I’d already gathered in the Nepal Travel Tech Guide prior to my trip. I’d like to share with you the techy gear and gadgets that I found useful during the 4 days of my post-earthquake waiting in Kathmandu. 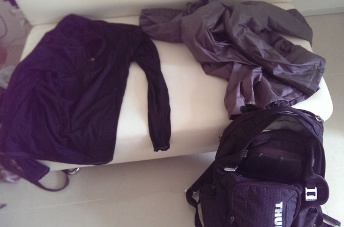 I decided to bring my daypack as my main bag. I was not planning on doing any multi-day hikes; therefore, I did not bring any gear specifically for hiking or trekking. I was travelling light, and this helped me out in several ways throughout this ordeal. When we needed to be quick on our feet to get to safe and open grounds, it was easy to simply grab my backpack and get going. If I had been carrying my main backpack along with my daypack, I would have been forced to shift all my essential gear into my daypack and leave the main backpack behind.

Lesson: Have a pack that you can easily store all your essentials in and get going fast if you have to! 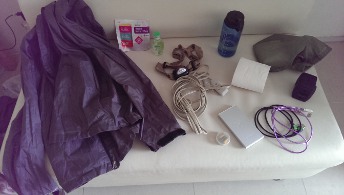 I always carry around this essential gear no matter where I go. I ended up using this essential gear so many times during this particular trip, these items are worth their weight in gold. The only one thing I did not end up using right after the earthquake and up to the point I safely departed Nepal was the headphones. At one point there a bunch of us stranded passengers had to sleep wherever we could in the hotel lobby floors, and sure there were loud snoring neighbours and others that were also making other noises.. but I had to keep my ears entirely clear to anticipate aftershocks to vacate the premises for safer grounds at a moments notice.

Along with that essential gear, I also always carry a small medical kit that contains various items for misceilaneous ailments that might befall a traveller. It also contains some gauze, tape, and anti-bacterial ointments for cuts and scrapes.

And if you’ve ever been to Nepal, you might find that there are few more things you’d add to your Essential gear list, such as extra hand sanitizer, a few face masks to deal with the excessive dust, some throat lozenges, and some insect repellent.

Lesson: Essential gear is compact and you carry it around with you everywhere. It’s essential!

When it became readily apparent that there would be a food shortage, I immediately stocked up on dry goods that I could either cook or eat raw. This included a bunch of dried packaged noodles, crackers, chips, oatmeal, and other miscellaneous snacks. I also carried around a sealed 2 liter bottle of water, plus my trusty half liter nalgene. In case of serious emergency when there would be no access to food or water, I would be able to survive for perhaps a week with what I carried.

Lesson: Figure out fast what might be in short supply and try to get access to it.

As you might imagine, getting reliable news and updates while in one of the poorer developing countries was a bit of a challenge. Shortly after I had landed in Nepal, I bought a local SIM card and loaded it up with data. I had an offline copy of the locale in Google Maps, downloaded and installed the Power Load Shedding Schedule, and also had access to the Nepal dictionary through Google translate. Some of these things became irrelevant during the crisis, as the mobile network came and went at times, and of course the power went out altogether.

Nevertheless, having a mobile phone, a local sim card, and a battery pack really came in handy. When I was able to use the internet through my mobile, it was of course extremely convenient. I was able to quickly check the latest news concerning the earthquake, if it affected the airport runway, and if when they flights to resume for travellers. I was also able to book my next flight out of there!

I had chosen to get NCELL, the Sim card of choice for those wanting reasonable data rates in most places in the country. It turns out that Nepal Telecom would have been the better choice, since that mobile network came back online a few hours before NCEL… but who would have the forethought to buy both SIM cards?

In any case, when communications are scant, you need to maximize your chances at getting some sort of information in as many different channels as you can. As you’ll see in a bit, information being passed around may be wrong.

Lesson: Give yourself options by being connected. Get a local sim card (or two), install useful apps.

Daily Routine During the Earthquake

We happened to stay in a hotel that was able to withstand the initial earthquake relatively intact. The hotel had a power generator that they turned on for a few hours each day, and sporadically throughout the night during the days following the earthquake. When the power was turned on, power outlets were in short supply. Fortunately, my extension cord and adapter allowed me to recharge 3 things at once- my mobile phone, external battery, and laptop.

They also had a safer area in the hotel lobby where we were able to stay and try to sleep. The local internet through wifi worked during the day of earthquake and cut out entirely thereafter. When there were tremors and aftershocks, we’d rush out to nearby open grounds. During the day, we stayed outside as much as possible and only came into the building at night or when raining.

We’d venture out on limited walks to search for any stores that might be open so that we could buy food supplies. Also, we found one hotel that had internet that worked throughout the ordeal. They also happened to serve basic meals of eggs, omelettes, and soup- great for when there is nothing else to eat. Drinks including coffee, tea, and surprisingly, beer, were also available.

There’d be times when our hotel staff suggested that we seek open ground because they had heard news of an impending aftershock. During those times, we’d walk to the safest open grounds we could. The initial biggest danger with Earthquakes in Nepal are that the crumbly buildings will fall on top of you.

Basically, we’d try to get some sleep, get up and outside during tremors, go back inside when it was safe and the generators were on to charge our gear, venture out to hunt down food and try to get news via the internet. We had already booked the next available flights but would still have to wait four days. During day one of the earthquake, the airport was completely shut down. It reopened for limited military and aid flights on day two. On day four (when we eventually flew out), the airport was able to handle flights out much better than the previous days.

The Trouble with False News and Rumors

It was Monday (day three after the earthquake) and we had a flight out the next day. We had ventured out for some food. When we walked back to our hotel, the hotel staff had told us to immediately leave due to news that NASA had predicted another earthquake to hit Nepal, one that would be larger that the first 7.9 quake that disrupted our trip. We had less than 10 hours to leave Nepal!

By this time, we were all fairly ragged, having endured three days of very little sleep and food, dirty and dishevelled, having witnessed dead bodies being carted away right in front of us. How best to react to such news? Of course, if the mobile network came back, we could perhaps call someone. Or if mobile internet miraculously started working, we can check for ourselves online. At the time, we had nothing and noone we could turn to to corroborate this news.

It so happened to be a vicious rumor. How did we find out? We had to pack up our stuff and find transport out to somewhere other than there. We were able to secure hotel transportation and proceeded to go the U.S. Embassy. They quickly set us straight. There was no official news release from NASA- there was no confirmed report of another major earthquake to hit Nepal; this didn’t mean Nepal was in the clear. The ground we were standing on was still churning like there was no tomorrow! We should still make our way out as quickly as we could.

But at the time, it was impossible to call the airport, any airline, any hotel, the embassies. Either the networks were down or the lines were busy. But if you are able to get online, try these sources directly yourself:

At one point, as I was able to get access to internet, I resorted to tweeting my airline for a status update on flights. To my surprise, they did tweet back and I felt reprieve that my flight would continue as scheduled the next day. I also tried to post in a popular online forum to see if others were stuck as I was in this situation.

The little bits of technology that we can travel with these days are the same things we use at home. Once properly set up for use on the road, the mobile smartphone can be used whether you’re in Chicago or Caracas. During times of emergency, you’ll want to utilize what resources you have to help you get out. Having use of my smartphone with the extra battery came in rather handy during this crisis.

Oh, and don’t be afraid to use any and all low-tech means to help yourself get out of situations. With uncanny regularity, just before a tremor/aftershock would hit, the birds (especially the vocal crows) would go insane, chirping and cawing like there would be, well, and impending disturbance. It got to the point where we would instinctively seek open grounds when the birds started acting up.

In the future, I may consider getting more than one SIM card for a country, especially if the country does not have good infrastructure. I want to maximize my chances of using technology to my advantage while travelling It could mean the difference between getting out of a difficult situation in three days as opposed to much longer.

Stay safe and and travel light.